Here are some notes about the restoration of a chest of drawers that Maia and Jay found at the Henderson tip shop for $10 early in 2018.

It's got these amazingly wide boards for the top, sides, and bottom. Turning it up on its end, the wood looks to be camphor laurel (which would make sense for the width). The other bits of the frame seem to be pine, with something else as the frame facing and drawer sides. Another nice feature is the dust boards, which maybe are also pine.

I'm not really sure what to do with it to make it a bit more sturdy and usable, without losing the general feel of the thing. I've started pulling it apart and cleaning out the extraordinary amount of dust that's almost solidified in all the crevices. A couple of the front frame members are loose, with the facing that was in front of them (and holding them in their mortises) long gone. I'm numbering each part as I remove it, with masking tape tabs at two meeting places so hopefully it'll all go back together in the original order. 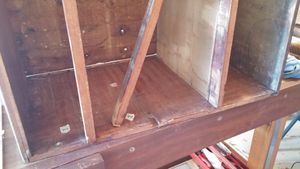 Numbering the parts as they come out. 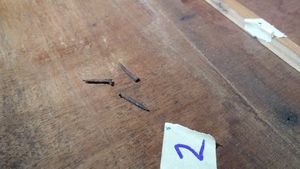 There are quite a few nails holding bits together, such as the draw runners (or what would be the runners if the dust panels weren't resting on them; the drawers seem to run pretty much across their whole bottoms — although that's also because the bottom edge of the drawer sides are so worn that their riding a good 5 mm lower than they should be). The nails are all a bit rusty, and generally have big flat heads and look to be square in section (i.e. are 'cut'). Does that date this thing a bit more; maybe pre-WW1?

I like the rebated ends of the front frame pieces, they're set into the boards of the side about 10 mm (with the rebates sloping back a bit, in some a couple of mill.). The good bit is that the bottom edge of the rebate is a dovetail sort of thing, meaning that it holds the whole carcase together horizontally. The top edge is just square (no need to have it on both). The drawer runner (which isn't really), nailed back in.

Gluing the bits back together is a good feeling. Well, apart from the idea that maybe I'm being a butcher to this nice old thing! But oh well, it was going to the dump anyway. Putting the drawer runners back in I wonder if I should reuse the original cut nails. They're about 19 mm long, not too rusty, but a bit bent. I'm worried that if I straighten them they'll snap. And anyway, the holes they're going in are pretty worn... I wonder if I should just use some of these 20 mm stainless screws I've got here? Is that bad?

No, I tried with the nails and they feel good and solid. Perhaps gluing the little runners across the grain of the sides of the chest is a bad idea (from a wood movement point of view) but it's done now. Time to give up for the evening; is getting cold.

Another couple of evening hours were spent in pulling apart and cleaning and re-gluing a few other bits of the frame and drawer supports. The whole thing started to feel a bit more solid. I was looking forward to getting the thing polished; there's always something nice about a slightly ramshackle wooden thing that's been well-polished. Sort of softens the crappy bits.

The next thing to tackle is reconstructing the bottom edges of the drawers, where the sides have been so worn away that the trench for the draw bottom is exposed at least at one end. The wearing seems to be at an angle of about 7 mm over the 430 mm length. I think the answer might be to create an L-shaped piece and completely cut away the remaning wedge off the drawer edge, replacing it with new wood.