3:15PM. I stood on pretty much this exact spot some years ago, and then as now it was the view that I had been waiting for on the walk — before I could get out my notebook to write.

I’ve been walking for half an hour, or maybe a bit more, through the suburbs to this north bit of Manning Reserve. I’m squatting down at the top of a steep bit of the track, just west of the top of the hill; this is the first point from which one sees the old power station. For some reason, I didn’t feel like stopping, let alone writing, until I’d had this first glimpse of the ocean, Garden Island, and the untouched hulk of the power station.

Not that there wasn’t lots to write about as I scrambled through the scrub — on no tracks — to get here. I found quiet little hollows; and stillness under the thick sharp bushes; and piles of sand and rocks, often embankments stretching for dozens of meters at a time. These last, that are now safe under the roots of trees and (I hope) conservation covenants, but were being shoved around by bulldozers in the 1950s.

I almost got my notebook out at one little gully, where there was a cairn with a carefully-balanced mosquito coil, and a little rock wall that looked to have been formed by more than just chance. But I was too excited. There’s so much to see up here, and it’s the part of the world which reminds (note that: reminds, and not necessarily excites) me most about the absolute joy of exploring. I’ll wonder onwards. 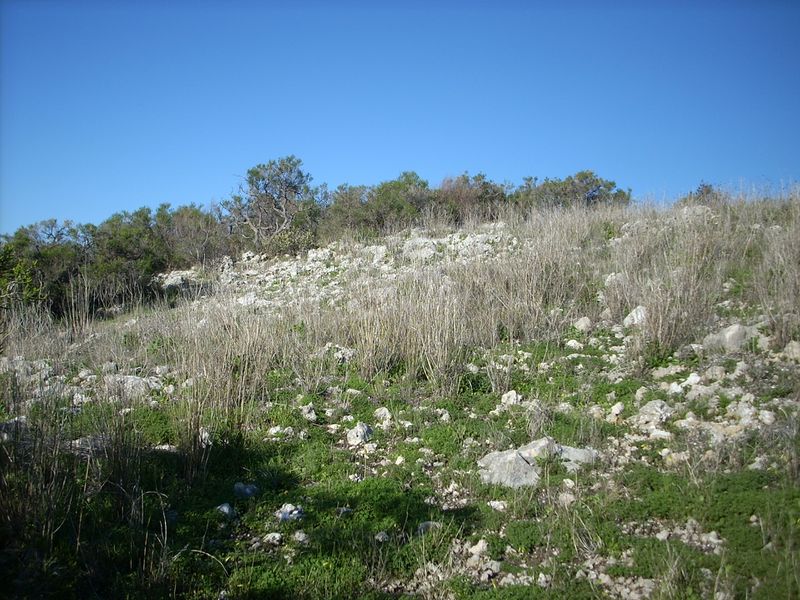 3:35PM. I’m always drawn to the highest points, and the lowest. So I’ve come up here just to the south of where I was. It’s amazing! So still and beautiful. The crows are croaking away and flapping down into the grass, the traffic revving below, the sun getting lower… the rocks here feel so… earthly — like the Earth, the actual planet, is so close here, so close to the surface, bits of it are breaking through and crumbling off. It’s lovely.

I can see the South Freo dump from here, well defined. (Would be a good place for a photo one (late) morning; don’t know if there’s any Wikinews article about that site yet. Should check.)

3:49PM. I’m sitting on one of the four feet of 66kV pylon #4 5F OC 72. Two little propeller-powered aircraft have just passed overhead, heading east. The (many) powerlines in this saddle (for that is where I am) are humming, but not annoyingly.

As I’ve been walking along I’ve been thinking about my blog, and my new ideas about how to organize my writing and photography. I want to map all of this, all of these little paths and high points, these gullies and saddles. It is so good for clear thinking, getting out and aimlessly rambling.

4:06PM. I am sitting on the “Cultural Council Lookout” (constructed under C.E.P. scheme, November 1987 — whatever that means). For one second, there was no traffic, and I realised how very invasively noisy the road is. Oh well.

I have just been thinking about the trails through the woods in Marin County; and whether or not I would have been so keen to get a job in I.T., or buy a house, if I’d been walking up on these hills around the times when I did those things.

4:15PM. Three people! One, just now, running past me with headphones in his ears, a big stocky fellow. Now, two more, coming towards me now with dogs, following the fence that runs from the top of the hill above the big blue Cockburb arrow thing.

I’m at the next bit of Cultural Lookout, although there doesn’t seem to be a plaque here. No doubt there was, and it was torn off along with half the wooden benches—the vandals here have managed to wreck bricks and mortar; the benchtop is twenty meters away in the scrub. A bit of concrete near my foot has “P. Kaho 87” scratched into the render. I wonder if that was the name of the mason.

4:33PM. I could say lots right now about all of the new roads and other development that are stabbing into the bush around here. But I don’t want to dwell on it; it just makes me angry. (Of course, I can only imagine my discust if I’d been here in the 50s when they were building the power station!) 4:47PM. I’m in the quietest, dampest, most ignored bit so far: on the track that runs along the south side of the railway, just next to the Watsonia factory. It’s all overgrown and nice, the sun is all orange, and my anger at the stupidity of the modern world is all melted away.

This is very different country: no native flora, and still wet from last night—much less Australian, and I wonder whether some of my relaxation here isn’t to do with that. This is a bit of ground that I could imagine reading about in a book set in the UK.